Within skeletal muscles, there are three muscle fibre types. Type one (I), type two A (IIa) and type two B (IIb). Each fibre type has different qualities in the way they perform and how quickly they fatigue.

Type I muscle fibres are slow-twitch. They are red in colour due to large volumes of myoglobin. As a result, they have high levels of Mitochondria and oxygen.

This makes them very resistant to fatigue and good at aerobic metabolism. Therefore, they produce repeated low-level contractions by producing large amounts of ATP (adenosine triphosphate).

Muscles with mainly type I fibres are often postural muscles, for example, in the neck and spine. Also, athletes such as marathon runners have a high number of this type of fibre, partly through genetics, and partly through training.

Type IIa fibres are fast oxidative fibres. They are a hybrid of type I and II fibres. These muscle fibre types contain a large number of mitochondria and myoglobin, hence their red colour. They also manufacture and split ATP at a fast rate.

This means the use of both aerobic and anaerobic metabolism. They produce fast, strong muscle contractions, although they are more prone to fatigue than type I muscle fibres.

Resistance training turns type IIb fibres into type IIa because it increases the muscle’s ability to utilise the oxidative cycle.

Often known as fast glycolytic fibers they are white in colour due to a low level of myoglobin and also contain few mitochondria. They produce ATP at a slow rate by anaerobic metabolism and break it down very quickly.

This results in short, fast bursts of power and rapid fatigue. As mentioned above, this type of fibre can be turned into type IIa fibres by resistance training. This is a positive change due to the increased fatigue resistance of type IIa fibres.

These fibres are found in large quantities in the muscles of the arms. 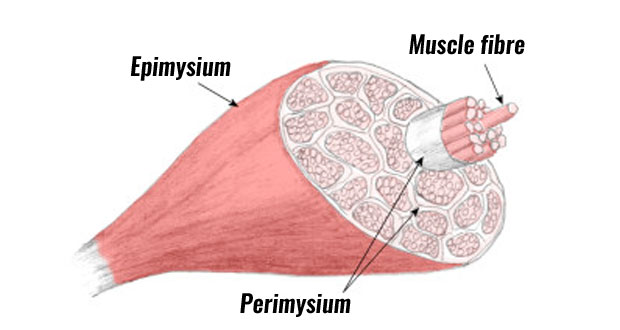