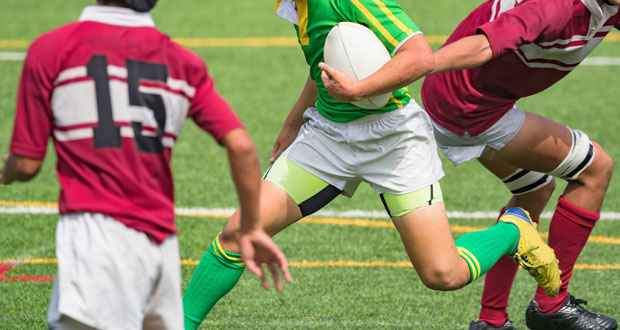 Click on the links below to view rugby coaching drills covering the basics of all aspects of the game including passing & handling, rucking & mauling, the scrum and more. Each drill has a video demonstration with coaching points.

The distinction between ‘Rugby Union’ and ‘Rugby League’ is one that has created a fair amount of confusion over the years. In this section, we will give you more information behind the inception of the two codes and their differences.

Kicking in rugby can be used as a defensive or an attacking tactic, depending on the situation. It is a good way to clear the danger if the team is under pressure. However, with a good kick over the top of the opposition they can be the team under pressure.

The scrum is used to restart play if the ball has been knocked on or gone forwards in some way if the ball fails to come out of a ruck or maul and also for an accidental offside.

The maul is often used when a team needs to regain control of the ball, or because the opposition has partially stopped the attack. A maul is also used to unsettle the defense, but it is important to keep the ball moving.

A ruck occurs when the ball is on the ground and at least one player from each side is in physical contact with the ball between them. It is a technique used to get or keep possession of the ball after a player has been tackled in open play.

Warm-Up Drill 1: This rugby drill can be used either as a warm-up or to improve fitness. Players pass the ball whilst moving continually to a cone and back again. Accurate passing is important for this drill. This warm-up drill is mainly used to warm up the arms, hands, and passes.

A line out occurs when the ball goes out of play. The following drills and practices help a team develop skills to win the lineout including lifting where safety is essential.

Rugby footwork and agility drills demonstrate how to develop skills to sidestep, swerve, spin and offload the ball with the aim of avoiding tackles and keeping the ball moving.

Rugby drills which introduce players to tackling and gradually build confidence. Beginners start with learning the basic techniques by doing a slow-motion tackle from the knees. This is progressed to tackling on one knee, then standing through to one v one full-contact tackling practices.

Basic Pass: This drill explains the very basics of passing. Being able to deliver consistent and accurate passes is an essential skill all rugby players need. The lateral pass is the most basic of the three but enables players to pass the ball over both short and long distances.

Rugby is a tough, competitive contact sport that involves players tackling each other head-on and using their full force to move the opposition. Contact occurs in scrums and rucks, as well as tackles on a player running with the ball. All of these actions can cause injury, with some being severe.